Green energy advocate Tom Weis is riding 2,500 miles from Colorado to Washington, DC on a human-powered, electric-assist “rocket trike,” calling for a national goal of a 100% U.S. renewable electricity grid by 2020.

The ride and goal are backed by prominent environmental and business leaders demanding urgent action from Congress and the White House in response to a deteriorating global climate.

The ride began at the National Renewable Energy Laboratory’s wind technology center on Sunday, the 48th anniversary of a historic speech by President Kennedy calling on the U.S. to land a man on the Moon within a decade. “The urgency of our economic and planetary meltdown demands a modern-day green energy ‘moon shot’ for America,” Weis said. “We need a call to action from our President today challenging America to once again do something great.”

Over eight weeks, Weis plans to visit a dozen states to profile solar, wind, geothermal and efficiency solutions, as well as polluting energy problems like coal burning, nuclear power and mountaintop removal mining. A petition issuing the 100% by 2020 demand is posted at: www.ClimateCrisisSolutions.com.

Sponsor Lester Brown, President of Earth Policy Institute and author of Plan B 4.0, says the 100% by 2020 goal is “achievable,” citing precedents for such rapid economic conversions. “During World War II, America mobilized its resources at a stunning pace, leading the Allied Forces to victory in three-and-a-half short years,” he said. “We need a similar, American-led green energy mobilization today to save civilization.”

Citing the job-producing benefits of renewable energy development, David Blittersdorf, CEO of AllEarth Renewables, Inc., another ride sponsor, said, “Our industry is uniquely poised to put Americans back to work greening the grid. It is time for renewable energy leaders to embrace this bold national goal.”

Ride backer Dr. James Walker, past president of the American Wind Energy Association and vice chair of enXco, Inc., agreed: “The wind industry needs to support a crash program to responsibly deploy as much wind power as humanly possible between now and 2020.” He cited the industry’s creation of 85,000 jobs in the last five years, as well as its cost competitiveness with coal, as reasons to favor wind over polluting energy sources.

Phil Radford, Executive Director of Greenpeace, another sponsor, addressed the urgent need to end coal burning, saying, “Contrary to what the coal industry would have you believe, coal is anything but clean or cheap. Each year, more than 23,000 Americans die prematurely due to coal-fired power plant pollution. No one should have to die to keep the lights on.”

“Congress and the President need to endorse this bold goal now,” said author and supporter Bill McKibben, founder of 350.org and the “world’s best green journalist,” as described by TIME magazine. “Fossil fuels are wrecking the planet and scientists are telling us we have very little time to act if we want to keep living on Earth.”

“Nobody can tell me America can’t do this,” Weis concluded. “We have a long history of fresh, entrepreneurial thinking that uniquely suits us for this historic task. It is time for us to once again step up and help protect the world.” 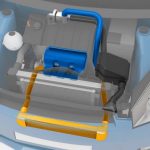