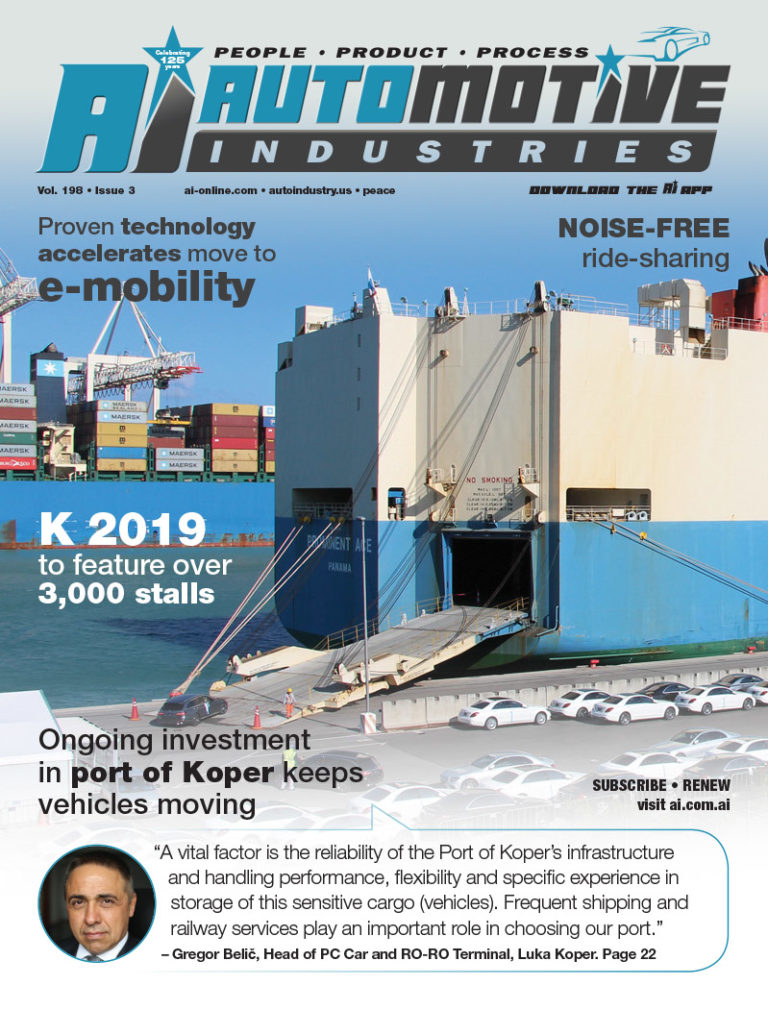 Slovenia lies on the crossroads of important cargo flows, which among the EU’s key transport corridors. Investments in the country’s logistics sector support the growth of various production plants, factories and engineering projects around Central Europe which are, in many cases, reliant on imported raw materials or components.

One of the main gateways for imports and exports is the Port of Koper, which has invested heavily in port infrastructure and superstructure. It has developed efficient hinterland connections, including rail – their intermodal split is close to 60 % in favor of rail, which is above the average of other ports in the region. This, according to the port, has allowed it to meet the requirements of customers who are expecting higher productivity, and the ability to handle bigger volumes and faster procedures. “Last but not least,” say the port authorities, they “have built good relationships with customers based on trust and flexibility toward their needs. Today, many global logistic players and manufacturers rely on port of Koper and include it in their supply chain – for example Asian producers of cars and electronic devices are using Port of Koper to supply their plants in central and Eastern Europe”. In 2018, the Port of Koper’s car terminal, handled over threequarters of a million vehicles, making it one of the top three ports in the Mediterranean.

The company that runs the Port of Koper, Luka Koper, has been chosen for the third time by German auto maker Daimler as the major port for the shipping of its vehicles manufactured in Europe. Daimler and the port of Koper have been working together since 2015. The port continues to expand its range of services offered. It has budgeted EUR 60 million spread over the next few years for additional facilities for vehicle handling.

Automotive Industries (AI) asked Gregor BeliÄ, Head of PC Car and RO-RO Terminal, Luka Koper how the new car terminal will boost the port’s position as a major center for the export of cars in Europe. BeliÄ: There are three main infrastructural projects currently going on, plus some recent IT improvements: At the edge of Basin 3 we are currently building up a new Ro-Ro berth for carcarriers. The berth will consist of a series of individual dolphins against which ships can lean, as well as a concrete loading ramp. The surrounding sea bed will be dredged as well. The new berth will significantly shorten the internal transportation routes, especially those to the warehouses on the right bank of the river RiÅ¾ana. The new berth will have a positive effect on damage ratio and will improve quality of loading/unloading operations. The north-eastern part of the port, where cars are mostly stored, is the only area which lacks access to the railway network. A decision was made to set up a new series of railway tracks that will facilitate the work and speed up loading and unloading of cars from railway wagons. The project anticipates a construction of four 700-meter-long parallel railway tracks with hydraulic lifting ramps placed at each track’s end, permitting the un-/loading of vehicles. The new railway connection will shorten the vehicles’ transportation routes from trains to parking lots or to other loading points within the port. In addition, it will increase productivity and safety and will allow the arrival of longer compositions. Considering that the modal split at the car terminal was 59% against 41% in favor of the road traffic, it is reasonable to expect that the percentage of railway transport will grow over the next few years. Both projects should be completed in the first quarter of 2020. There is also a plan to build a new garage. The new garage will have a capacity of 6,000 parking spaces, which will increase the annual throughput by around 162,000 cars. The construction of the garage will meet the increasing demand of customers for covered storage areas, while increasing the unique storage capacity and improving the internal logistics of car transshipment. Construction works should start in autumn this year and we expect the first cars to be stored in late 2020.

AI: What are some of the reasons why the Port of Koper is popular with automotive OEMs such as Mercedes Benz? BeliÄ: The manufacturers’ decision to choose Koper, or to reconfirm cooperation through the tender process, is for our company a confirmation of our successful cooperation and fulfilment of their expectations in terms of quality services. A vital factor is the reliability of the Port of Koper’s infrastructure and handling performance, flexibility and specific experience in storage of this sensitive cargo. Frequent shipping and railway services play an important role in choosing our port. The geographic location still represents a competitive advantage for the port of Koper, especially in relation to Asia – Europe transports. The shipping route from Asia via the Adriatic is about seven days shorter if compared to the route around Europe to north European ports, bringing lower transport costs, improved stock management and lower CO2 emissions.

AI: With the focus on new technologies – hybrid/ electric/connected cars – how is your port keeping up with changing demands of automotive manufacturers? BeliÄ: We expect that the majority of EVs, while waiting in the port, will require power supply, which is logical if you want to optimize the whole supply chain. That’s why we last year we built a new electrical substation to meet the increased consumption. We are already using plug-in stations in the existing garage and the new garage shall be built considering the requirements of EV logistics.

AI: What are some of the services you offer and what will be some of the new services you plan on offering car manufacturers? BeliÄ: A variety of additional services is provided by the associated company Avtoservis d.o.o., which provides PDI zero repair service, additional equipment at customers’ needs or requests, mechanical, painting and body repair services, LTSM (long term storage maintenance), wax protection, washing, PGF (protective guard film) removal and re-application, all kind of retrofits services, etc.

AI: What other investments is Luka Koper making in infrastructure over the next few years? BeliÄ: Other than the Ro-Ro berth, railway tracks and new garage, we opened in May 2019 a second truck gate on the eastern part of the port. Positive effects are already visible on the  whole port traffic situation. A major ongoing project is also the extension of the container terminal to reach the annual capacity of 1.5 million TEU by 2021.

AI: What are some of the projects under way at present? BeliÄ: Beside the infrastructure we are also moving on with the digitalization of our processes by upgrading our IT systems. One of the major recent achievements is the upgraded car terminal operating system – ACAR, which follows the modern trends of the supply chain with standardized data exchange, better overview of field operations and faster communication between the customer and the terminal. In spring 2019 we started with the new VBS (vehicle booking system) for truck arrivals, which should improve internal logistics of the port and reduce waiting times at the truck gates and loading points.

AI: How is the slowdown in the Chinese and Indian automotive industries impacting your port? BeliÄ: As expected, we registered in the January – June 2019 period a decrease of volumes on the car segment (- 16 %), mostly because of the global slow-down of sales of new cars, especially Europe. An important market for us is Turkey which registered a -43 % drop of new car sales in the January – June 2019 period. This has obviously affected our performance, especially export flows.