America’s future depends on its ability to translate new ideas into investment, jobs, and long-term productivity growth, said Kent Hughes, director of the Science, Technology, America, and the Global Economy (STAGE) program at the Woodrow Wilson Center. In the debate over handling the bankruptcies of Chrysler and General Motors, he said, the United States has largely ignored two critical factors: innovation and the industrial base.

“The auto sector—including its parts suppliers, engineers, and related services—is a key part of our innovation system that encompasses much more than the goal of producing new, fuel-efficient cars,” Hughes said.

The role of the government has become suddenly complex, Hughes said. It must act as lender, owner, regulator, and strategist, working toward energy efficiency and energy security. The auto industry’s challenges, however, also come from the market.

“Demand for autos is down and the U.S.-based auto sector has to contend with highly competitive exchange rates in China and other parts of East Asia as well as overseas incentives to lure production offshore,” Hughes said.

“Going forward,” Hughes said, “we need national policies that support the auto and other industrial sectors coupled with national investments in advanced manufacturing. We neglect the industrial base at our peril.”

The Woodrow Wilson International Center for Scholars is the living, national memorial to President Wilson, established by Congress in 1968 and headquartered in Washington, D.C. The Center establishes and maintains a neutral forum for free, open, and informed dialogue. It is a nonpartisan institution, supported by public and private funds and engaged in the study of national and world affairs

Revolution in Fasteners Helps Bridge the Gap to Greener Vehicles 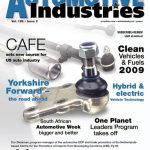