The board approved $2 million at the Nov. 19 meeting for a total of just under $5 million dedicated recently to high density paving at the Port of Savannah’s Ocean Terminal.
The improved surface employs Roller Compacted Concrete (RCC), which is conducive to the heavy traffic and loads endured by paved surfaces in a shipping terminal. Unlike traditional concrete, RCC is relatively dry when poured.

Using RCC reduced the cost of the project and the amount of natural resources required, as well as offering a slightly faster cure time.
The additional funding will expand outdoor paved areas to improve sorting and storage of cargo handled at Ocean Terminal. The work includes expanding and improving the cargo pressure washing area, and cargo staging areas to support outside stored cargo.

In the last four years the volume of Ro/Ro cargo moved though Georgia’s deepwater ports, including Savannah’s Ocean Terminal and Brunswick’s Colonel’s Island, has nearly doubled from 293,265 in FY2009 to 569,984 in FY2012.

Foltz said machinery exports are set to expand in the wake of Governor Nathan Deal’s February announcement of a 1,400-job Caterpillar manufacturing facility near Athens. The factory will build small track-type tractors and mini hydraulic excavators. Proximity to the state’s ports factored into the company’s decision to bring those jobs to Georgia, Foltz added. 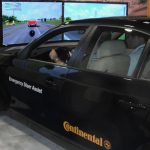