The challenge of reducing mass in automotive design is not new – the increasing demands of CAFE and EURO compli¬ancy targets have pressured manufacturers to save weight and increase vehicle efficiency. On its own this would not pose too great an issue. However, the uneasy bedfellow in this situation is that of safety.

An inescapable fact is that with the addition of each occupant and pedestrian safety system comes a weight penalty. But, with emissions targets in the European Union reaching a critical waypoint in 2015, the pressure is on manufacturers to improve the average CO2 emissions of their fleet.

The question is: how can the combined target of lower emissions and improved safety be achieved? Take the Mark7 Golf. It is purported to weigh 100 kg less than its predecessor. But, this still places the car at approximately 1,260 kg which is very nearly half a ton heavier than the original Mk1. The integration of safety systems carries a large responsibility for this additional mass.

One way to make appreciable weight savings is to use compounded graphite iron (CGI) in cylinder blocks. It outperforms aluminum, which struggles with a low modulus of rigidity when compared to cast iron, which for gasoline engines is not too great a problem as typical compression ratios orbit 10:1. However, when considering diesel engines which operate at compression ratios of 17:1 and above, it becomes quickly apparent that in its current permutations, aluminum is not a suitable material for the >50% of European motorists who purchase diesel-powered vehicles. CGI possesses much greater modulus rigidity than aluminum and grey iron, and offers a significant 30% weight saving.

The introduction of the third-generation EA888 engine block from Volkswagen (which is a CGI block) will undoubtedly be the starting gun that the likes of Ford, GM, Daimler and others – which still have ground to cover before 2020 – will start following suit. This is not the whole story. Whilst engineering breakthroughs such as CGI can save mass, the issue of safety systems will continue to add the kilos back on. Mass reduction is a finite science, especially when considering that many advanced lightweight materials are either prohibitively expensive or currently not suited to mass production.

A key to this situation may lie in the approach to safety systems and the application of proactive rather than reactive technologies. Virtually all safety systems at present are reactive, responding to an incident. A logical step would be to avoid the problem by providing information proactively to the driver, enabling situational judgment to occur before events turn critical – in much the same way as advanced drivers can anticipate situations and avoid them before they develop.

In a world of connected vehicles, the possibility of vehicles being able to utilize data networks to identify hazards and highlight them to the driver (such as oncoming vehicles when assessing overtaking opportunities, the proximity of local accident black spots or blind junctions etc) would give them the information they need to avoid the problem rather than to react when faced with the danger.

Obviously the integration of such systems would require a multi-layer approach to counteract the lack of connectivity in older vehicles, and there would have to be a level of acquiescence from the driver to accept recommendations of any such system. However, such safety systems would largely amount to onboard software which logically makes the return on (mass) investment a very attractive prospect.

It would leave designers with the breathing space to lose the required mass and improve energy efficiency to meet emission targets. Whilst any such systems are undoubtedly a long way off, detractors should consider the man/machine relationships in the aerospace industry as an example of such interfaces working successfully. Furthermore, with Google’s purchase of Smartphone navigation company “‘Waze” which uses location and trajectory data to advise of traffic patterns plus suggest alternative route based on other users experiences, it could be said that such systems are already in the market

Reindustrialisation of the traditional manufacturing hubs 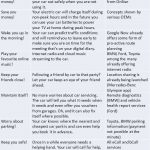 The connected car: who pays and how?

Daimler on fuel cells and e-vehicles