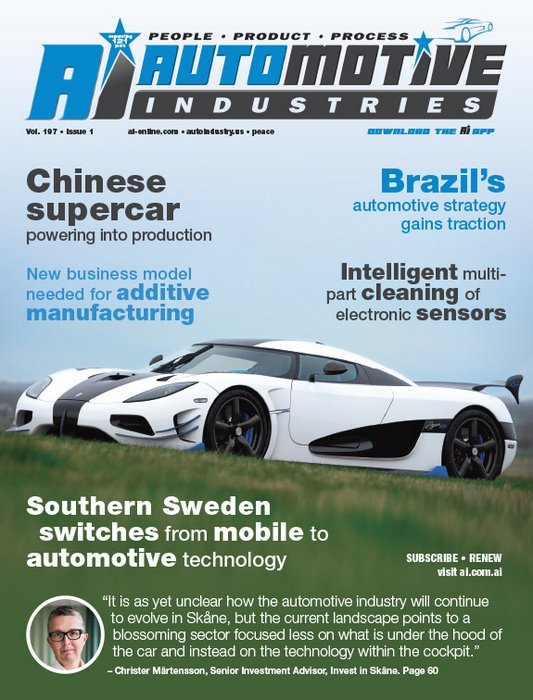 Traditionally, the history of the car industry in Sweden has revolved around Gothenburg and the surrounding region, but as technology keeps changing to incorporate features such as driver assistance, infotainment, and cloud connection, companies are turning to tech centers like Skåne in search of skilled talent.

That is according to Invest in Skane, the official regional business promotion agency for Southern Sweden. The region is a major hub for software development in the automotive industry.

“The whole automotive industry is in a huge change. You have four megatrends: electrification, connectivity, autonomous drive, and sharing. All of those things are creeping into the design [of] the car and also outside the car…and all of this is interlinked with software somehow. So, in addition to being a mechanical company working with combustion engines, we are now also growing our skills and capacity into being a software house, handling and developing complex software for all systems related to the car. It’s a huge journey and its extremely exciting to be involved in that now. And that is just going to increase in the coming years, “said Henrik Svensson, senior manager, Volvo Cars, when commenting about Volvo’s expansion of its Lundbased research and development site. The R&D site situated in the student city of Lund primarily develops software and electronics for the Volvo car of the future.

Skane is an ideal location for automotive companies to find competent and skilled engineers, thanks to an extensive history of big mobile companies being present in the region, such as Ericsson, which established its mobile communication HQ in Lund in 1984. In 2016, Bosch, Volvo Cars, and Continental set up software development centers in Lund, recruiting developers from the region with extensive experience in fields like embedded software solutions, connectivity software security. connectivity, automotive security systems, and motorized two-wheelers. In addition, they are developing cross-domain solutions for connecting mobility with, for example, energy and building technology over the IoT.

By bringing together development activities for a number of different areas at a single location, Bosch hopes to facilitate mutual inspiration. “We are systematically driving forward the development of connected, cross-domain solutions over the IoT with the aim of making life more secure and convenient,” said Dr. Dirk Hoheisel, a member of the board of management of Robert Bosch. “To this end, we’re focusing on cross-divisional collaboration that enables synergies and creates the basis for new ideas and creative solutions.” Bosch and the other early investors have been joined by big players such as Ericsson which is focusing on 5G and Ublox focusing on navigation and connectivity. There are also several smaller startups engineering smart solutions for a transforming automotive industry, like Mapillary, Ximantis and Uniti. “I would say the competency available in the area was the top reason for starting up here,” says Carl Gustavsson, deputy site manager at Bosch’s software development center at Lund’s Ideon Science Park. “The number of people working in embedded software solutions, connectivity, [and] software security was a reason for choosing Lund for this location”.

The move into automotive companies by software engineers is benefiting both the industry and the local business environment “There is – slowly building up – a bigger mass of people who will be doing automotive-related stuff. In the long run automotive competence will increase in the region, which is good for us,” says Gustavsson. It is not only in software that the region excels. Supercar manufacturer Koenigsegg Automotive has had its manufacturing facility and headquarters at Angelholm in southern Sweden since 2003.

Mårtensson: We are a tech savvy country where 97% of the population speak English. Skane has history in mobile tech since 1984 with the arrival of companies like Ericsson and Sony. We have a large talent pool. The Malmo and Lund area has 78,000 students compared to Frankfurt’s 58,000 students. The mobile tech industry collapsed some years back, and the talent from mobile tech is now driving the digital transformation in the region where mobility/automotive is one sector that is benefiting. Two of our recent firsts are the development of the first graphic user interface for Android and Bluetooth. Less known is we have a competitive cost of operation. Compared to many cities in Germany you will find about a 20% cost advantage setting up an R&D center in Malmo/Lund region.

AI: Why has the Southern Swedish region of Skåne, become the hub for e-mobility in Sweden.

Mårtensson: The diversity of people and talent combined with a global innovative mindset are two of the reasons. This mindset is recognized in the 2017 European Innovation Scoreboard, which ranked Sweden as the most innovative country on the Continent. The survey identified Swedish strengths as human resources, an innovation-friendly environment and attractive research systems.

AI: Why did up-coming electric car companies like Uniti settle on this region to set up HQ?

Mårtensson: The region has a number of serial entrepreneurs, for example former Apple employees who are very active in building and developing the start-up community. Former Sony Ericsson CTO and Lund-based entrepreneur Mats Lindoff points out that – in contrast to the mobile phone industry – the car industry depends on multiple sub-suppliers producing units for components like infotainment or the telemetric transmission system. Sub-suppliers need to be close to resources and to their customer. We have the resources here, and we are well positioned geographically to Gothenburg, Volvo Cars, Scania, and southern Germany. This is another reason why Skane is a logical choice for companies like Bosch. It is often quicker to get to Frankfurt, Germany via Copenhagen airport than Stockholm in Sweden from here.

AI: Where do you see the automotive industry going in Skåne?

Mårtensson: It is as yet unclear how the automotive industry will continue to evolve in Skane, but the current landscape points to a blossoming sector focused less on what is under the hood of the car and instead on the technology within the cockpit. This could be positive not only for further talent attraction but also talent distribution – which will benefit automotive investors in the region. Lindoff points out that society benefits when competent talent is spread out amongst various businesses. He has said it is much better to have lots of choice, both for the engineers and the companies. For society, it’s also better to have 20 companies with 100 engineers each than to have one company with 2,000 engineers or even 5,000 engineers like he had at Sony Ericsson

Innovation and research in the region are being stimulated and supported by the European Spallation Source, which is under construction in the city of Lund.

It is one of the largest science and technology infrastructure projects being built today. The facility design and construction includes the most powerful linear proton accelerator ever built, a four-ton, helium-cooled tungsten target wheel, two dozen state-of-the-art neutron instruments, a suite of laboratories, and a supercomputing data management and software development center.

How does ESS work?

Europe’s need for an advanced, high-power neutron spallation source was articulated 20 years ago. The European Spallation Source is a pan-European project with 15 European nations as members and Sweden and Denmark as host nations. The ESS facility is being built in Lund, while the ESS Data Management and Software Centre (DMSC) is located in Copenhagen. Around two to three thousand guest researchers will carry out experiments at ESS each year. Most of the users will be based at European universities and institutes, others within industry.

The construction of the facility began in the summer of 2014, and the planning for the ESS user programme is ongoing. Scientists and engineers from more than 100 partner laboratories are working on updating and optimising the advanced technical design of the ESS facility, and at the same time are exploring how to maximise its research potential. These partner laboratories, universities and research institutes are also contributing human resources, knowledge, equipment, and financial support through In-Kind Contributions that will comprise up to 40% of the construction budget.