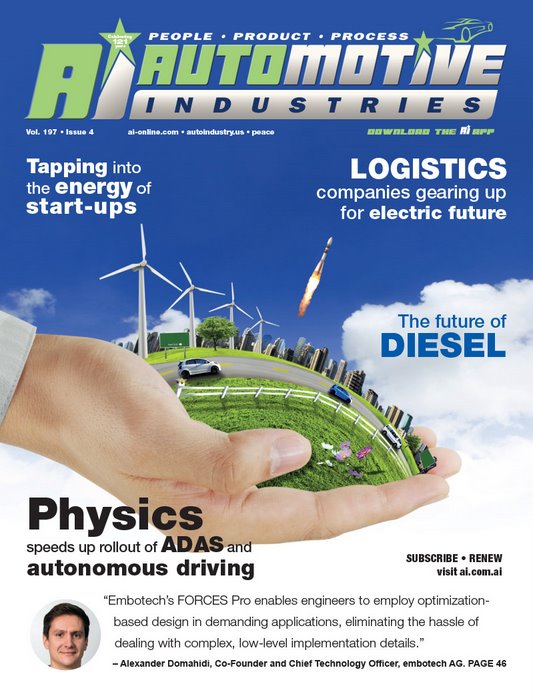 Physics-based software is being used to reduce the amount of computing power required to control autonomous vehicles and smart infrastructure compared to artificial intelligence (AI) or machine learning systems.

This is recognized in the 2018 Frost & Sullivan European Technology Award, which was presented to Swiss firm embotech (short for embedded optimization technologies) for its motion planning software FORCES Pro, which uses physics algorithms rather than AI to run autonomous vehicles and systems.

Wikipedia describes physics as “the natural science that studies matter and its motion and behavior through space and time and that studies the related entities of energy and force” – which is a good description of the challenges facing developers of software for autonomous driving. Embotech’s approach has been to develop FORCES Pro, which is described as a numerical core software tool. It is an auto-coder which automatically generates highly efficient embeddable C-code designed to solve complex motion problems.

According to Frost & Sullivan the software has positioned the company as an early mover in the development of autonomous driving systems. The major clients of Zurich-based embotech, which was founded in 2013 as a spin-off of ETH Zurich, include the European Space Agency (ESA), Volkswagen and Renault. Embotech is using FORCES Pro to develop motion planning technology for autonomous vehicles, reusable rockets and other machines.

“Embotech’s FORCES Pro enables engineers to employ optimization-based design in demanding applications, eliminating the hassle of dealing with complex, low-level implementation details,” said Anirudh Venkitaraman, Senior Frost & Sullivan Consultant at the announcement of the award. “The technology is agnostic to sensor technologies, which means that it can interface with several advanced driver assistance systems (ADAS) sensors, including LiDAR, radar, forward cameras, and ultrasonic sensors, to gather data and set up autonomous driving functions.”

The software supports level 2+ to level 5 vital embedded self-driving functions. An example for such a level 2+ function is embotech’s “Green Adaptive Cruise Control” which reduces fuel consumption or extends battery range for electric vehicles by optimizing the driving behavior of the vehicle for a given road profile and traffic situation. The ability to process new situations involving obstacles of all sizes, shapes, and positions makes it ideal for complex, unpredictable environments like congested roads or urban spaces. Additionally, the software is compatible with all standard automotive electronic control units (ECUs) and as well as non-standard vehicle types, according to the company.

According to Frost & Sullivan embotech gives OEMs the freedom to focus on important aspects of autonomous driving beyond software. The software facilitates vital embedded self-driving functions such as Highway Driver (eyes and mind off highway driving), Valet Parker (low-speed maneuvering and autonomous parking for parallel, perpendicular or any other parking spot configuration), and Urban Driver (city driving-including intersection and traffic jam assist). The system also can carry out emergency maneuvers (including braking and evasive steering) in all driving functions described above or by overriding the driver in manual mode.

In addition, embotech provides an infrastructure-based solution based on the same numerical core. In this case, sensors are integrated in the infrastructure and the real-time motion planner is located in the cloud. Using a Wi-Fi, LTE or 5G connection vehicles can be remotely driven with the embotech software. Embotech says its solution is one of the fastest and most reliable real-time motion planner currently available on the market due to its physics-based approach. It is embeddable in automotive ECUs with limited calculation power. Passenger comfort is assured through embotech’s algorithms which compute high-quality motion trajectories considering lateral acceleration and jerk in order to ensure a smooth ride. Driving behavior of the vehicle can be adapted in real-time considering passenger preferences or environmental situations like slippery roads due to rain or snow.

The software is capable of executing complex maneuvers up to the physical limits of the vehicle. There is also scope for customization of driving style by the customer.

“Our motion planner is fully deterministic, i.e. the motion depends only on vehicle capabilities and the surrounding objects detected by sensors. No situation is pre-programmed. Due to the systematic approach, adapting our algorithms to new vehicles is very easy. Even trailers are easily handled. We have designed our software from the ground-up to work on auto-grade, standard ECUs. No need for expensive computing units,” explains Alexander Domahidi, Co-Founder and CTO of embotech.

“Embotech AG is one of the few companies globally that develops autonomous driving and driver assistance software without employ­ing any form of machine learning in the driving function. It does so by focusing on its strength—motion planning algorithms. This gives its software an edge because it allows it to be coupled with any sort of ECU or driver assistance sensors to sense the surroundings, classify objects appropriately, and plan a path accordingly. Embotech’s mo­tion planner software can be integrated with any parking infrastructure (e.g. commercial parking lots, on-site logistics process automation, etc.) and can be optimized for executing complex parking maneu­vers. A single numerical core is sufficient to solve any parking situa­tion, which means that fewer codes are needed to program, maintain, and certify, thus translating to faster execution,” says Venkitaraman.

In addition to the Frost & Sullivan award embotech’s accolades include being ranked 79 in 2018 in the Top 100 Swiss start-up ranking. It also won the Pioneers 18 Mobility Start-ups Pitch session. Embotech was selected for the Volkswagen Incubator Program in 2018.

AI: What does it mean to embotech to get the European Technology Innovation Award from Frost & Sullivan as well as validation from the consultancy firm?

Domahidi: Frost & Sullivan is a very knowledgeable consultancy and market research firm highly renown in the automotive industry. Receiving the award from Frost & Sullivan is a confirmation that embotech’s optimization software and real-time motion planner for autonomous driving is unique and has clear differentiation factors compared to other solutions currently available on the market. It shows us that we are on the right path.

AI: Why does the non-reliance on artificial intelligence make FORCES Pro more effective than machine learning?

AI: How effective has embotech been in attracting automotive clients?

Domahidi: Embotech’s customers are located in North America, Europe and Asia and represent all types of vehicles, from two-wheelers to passenger cars to trucks. Over the past year embotech has acquired more than 13 Proof of Concept (PoC) projects with OEMs, Tier 1 suppliers and newcomers in the automotive market. Four automotive pre-development projects have started covering most of embotech’s automotive product portfolio – real-time motion planning, highway driving, infrastructure-based parking and energy efficiency.

Jerez: Depending on customer needs, they can use embotech’s software development licenses and program their own autonomous driving solutions around embotech’s core optimization software. Other customers prefer a development partnership with embotech allowing to customize the driving behaviour to their needs and to profit of embotech’s knowledge in problem formulation.

A disruptive industry being disrupted 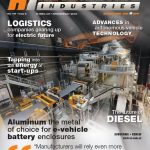 Aluminum is driving the future of e-mobility 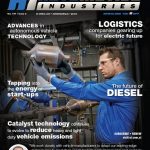 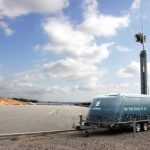 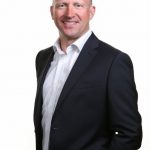 Reports of the death of diesel are exaggerated 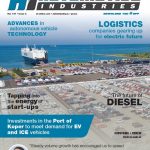