Skip to content
Automotive Industries caught up with Graham Wardlow and Chris Dagger of Magnesium Elektron, and asked about the future direction of development within the automotive industry

The UK-based Magnesium Elektron, is a division of the Luxfer Group – an international group of businesses that specialize in the design, manufacture and supply of high performance engineering materials, alloys and semi-fabricated components. Magnesium Elektron first produced magnesium in 1936 and subsequently became pioneers in the development of magnesium alloy technology. This resulted in the company setting up a research centre to develop enhanced alloy systems. Today, development continues at its technical centre in the UK and through its association with a number of international universities.

Magnesium is the lightest of structural metals – it weighs 75 per cent less than steel and is around a third lighter than aluminum. The commercial possibilities of the electrolytic method of production were first exploited in 1909 by a German company, Chemische Fabrik Griesheim Elektron.

By the 1920’s, the electrolytic process had been worked out on an industrial scale and the metal became available in commercial quantities to justify its use as a structural material. Currently, nearly 500,000 tons of magnesium is produced annually and this figure is increasing as the lightweight properties of the metal are being used in the automotive industry as it moves towards lighter vehicles in order to improve fuel efficiency and cut emissions.

Racing cars have been using magnesium parts since the 1920s. Today, the majority of F1 teams utilize the outstanding properties of the ELEKTRON high performance alloys, in particular ELEKTRON 21 & ELEKTON WE43. In 1936, the Volkswagen Beetle was using the metal and by 1971, nearly 20 kilograms of the metal was in the Beetle’s powertrain. Since then, automotive companies did not pay much attention to magnesium until relatively recently when it is being used as a strategic lightweight material in the automotive sector. With technology of magnesium alloys improving, more automotive companies are keen to use the metal.

According to industry sources, further growth is forecast over the next 10 years. In Europe, the increase in using magnesium as a structural lightweight material was initially led by the Volkswagen Group of companies, with the material also being used by other leading manufacturers including DaimlerChrysler (Mercedes Benz), BMW, Ford and Jaguar. Presently, around 14kgs of magnesium are used in the VW Passat, Audi A4 & A6. All those vehicles use magnesium transmission casings cast in the AZ91D which offers a 20%-25% weight saving over aluminum.

Other applications include instrument panels, intake manifolds, cylinder head covers, inner boot lid sections and steering components that utilize the more ductile AM50A and AM60B. In North America, the use of magnesium for auto applications is more advanced. The GM full sized Savana & Express vans use up to 26kg of magnesium alloy.

Magnesium Elektron is a major supplier of the alloys AZ91D and AM50 and provides complete recycling solutions for Europe’s high pressure die casting industry. In 2004, Magnesium Elektron signed a long-term agreement with BMW to supply the Noranda developed AJ62 magnesium alloy for use in BMW’s latest generation 6-cylinder petrol engines. This followed a three-year development period between Magnesium Elektron, Noranda and BMW where the former supplied numerous alloy variants during the development of the new engine. Today, Magnesium Elektron is the major supplier to the engine program with its ELEKTRON AJ alloy and has production capabilities from both its Manchester (UK) and Litvinov (CZ) operations.

Graham Wardlow, Head of Sales & Marketing for Elektron’s UK and CZ operations states, “During this period of development, Magnesium Elektron developed a major core competence in the AJ alloy technology and this has enabled us to offer BMW a reliable, cost effective solution for the long term supply of the alloy. Our decision to develop the flexibility to manufacture the alloy in both of our European plants is a clear illustration of our commitment to the BMW engine program and Magnesium Elektron’s position as a leading supplier of lightweight magnesium alloys to the automotive industry.”

Following on from the BMW program, Elektron is now involved in other AJ programs in both Europe and North America and is also developing magnesium sheet applications using its hot rolling plant based in St. Louis, North America.

Automotive Industries caught up with Graham Wardlow and Chris Dagger, Divisional Managing Director of Magnesium Elektron, and asked about the future direction of development within the automotive industry.

AI: Apart from BMW, have any other automotive companies shown an interest in increasing their use of magnesium or the AJ alloy system?

BMW set the standard in terms of technology and the application of magnesium. The concept of using an aluminium insert encased with a magnesium jacket provided a huge technological challenge. BMW developed many novel technologies to make the concept work and then applied the concept to its biggest selling unit – the in-line 6 cylinder petrol engine.

A number of other companies in Europe and North America are evaluating ELEKTRON AJ for this and other high temperature applications. The benefit of the AJ system relative to other high temperature Mg automotive alloys is that the alloy and supply infrastructure are proven for a large volume commercial application. Supplies today satisfy the production of over 400,000 engines per annum. The price differential today between magnesium and aluminium is also focusing companies to consider magnesium alloys as a real alternative to aluminium. The significant price increases observed in aluminium over the last two years is leading companies to consider direct substitution based upon cost alone.

AI: First it was Volkswagen and now BMW that have made serious investments in magnesium – why is it that German car makers seem more comfortable with the metal?

That is an interesting observation. We don’t believe that there is one single reason but more a combination of factors. Firstly, Germany has a long association with the metal. The origins of our own company have links directly with the original Chemische Fabrik Griesheim-Elektron company at Bitterfeld. By 1938, shortly after Magnesium Elektron was founded, the Bitterfed site was the world’s largest magnesium producing works. In the following years, Volkswagen became a major consumer of magnesium up until the 1980’s.

Secondly, Germany has always had a very strong die casting industry and this is where, to date, the major growth for the material has been observed. Thirdly, and probably related to the first two points, there are a number of educational establishments within the country that include magnesium technology as part of the Diploma curriculum. As such, Engineers take on posts within industry with some knowledge as to the structural benefits of the material.

The value of Magnesium Elektron in any automotive program is the application and development of its processing technology and metallurgical know-how. Back in 1995, we worked with VW to develop complete recycling solutions for all the process arisings coming out of the VW Kassel die casting operation. This directly supported VW at the beginning of their new program, which at the time was the biggest magnesium program in Europe. Twelve years on, we remain VW’s major recycling partner for magnesium. Over this period we have been able to significantly reduce our recycling costs through the £5m investment in our new alloying operation in the Czech Republic.

With BMW, our processing know-how was also utilized although the direction here was more on alloy development. Today, our role with BMW is to ensure a consistently high quality ELEKTRON alloy is delivered to the casting plant on time and to explore other ideas for the application of the material.

Looking forward, our US and UK operations are currently developing a number of automotive sheet applications, some of which use our know-how and manufacturing capabilities in the super plastic forming of magnesium alloys. A number of demonstrator components have already been manufactured with very promising results. Key to moving this forward will be the development of a number of associated technologies to ensure such results can be reproduced on a production scale.

AI: What are some of the problems with magnesium alloys that have made the metal unpopular with auto-makers and what is the long term outlook?

Over the years there have been a number of issues but probably the most significant have been corrosion performance and mechanical strength at elevated temperatures. With regard to the former, the corrosion performance of magnesium was traditionally poor relative to aluminium but in the mid 1980’s, work by Dow and Norsk Hydro showed that by reducing the level of impurities in the base alloys, significant improvements in corrosion performance could be made. This led to a new generation of high purity alloys being developed that are used today. General corrosion performance of such alloys is similar to aluminium but design considerations need to be made to avoid galvanic contact with dissimilar metals. In terms of mechanical strength at temperature, the majority of work in this area was conducted by ELEKTRON for the aerospace industry. Although ELEKTRON alloys were available that far outperformed the properties of aluminium alloys between 150oC – 300oC, these alloys were specifically designed for the sand casting process and as such were not suitable for automotive application. It is only in the last 5 years that high temperature die casting alloys have been made available. With the successful use of the AJ alloy system by BMW, the future looks promising for the increased application of this lightweight material in the global drive to reduce weight, increase fuel efficiency and reduce emissions.

In 2005 two million tones of aluminum components were put on European roads in new passenger cars. 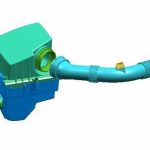