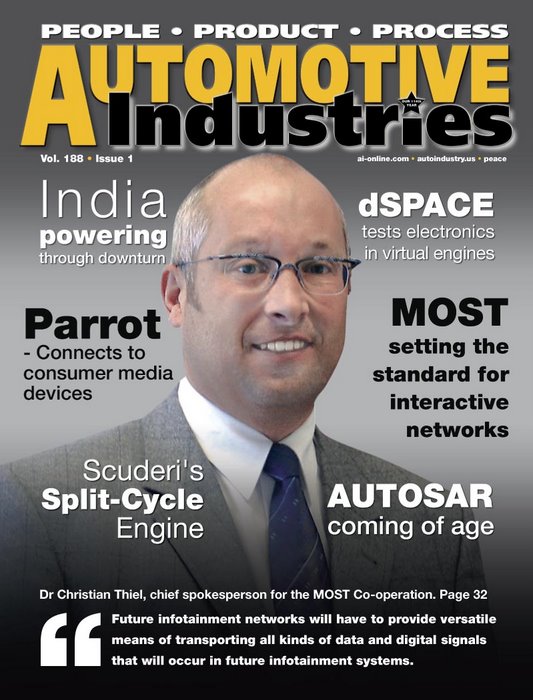 INTERVIEW – In August 2008, the MOST Cooperation, which is the organization spearheading the automotive multimedia standard, Media Oriented Systems Transport (MOST), unveiled its latest infotainment backbone. Called MOST Specification Rev. 3.0, it provides the specification for audio and video signals to be transported with high bandwidth efficiency and without any overhead for addressing, collision detection/recovery or broadcast. This way it offers capacity that packet-switched networks can only achieve with much higher gross bandwidth. Consequently multiple high-definition (HD) video streams and multi-channel surround sound with premium quality of service can be transmitted, while simultaneously moving high loads of packet data around.Â

The difference with the latest MOST Specification Rev. 3.0, is that it has factored in many issues that cropped up during the MOST CooperationÂ´s Compliance Verification Program experience. For example, Optimized Diagnosabilityâ€¨ has been optimized by an overhaul of Ring Break Diagnosis behavior as well as Detection of Sudden Signal-Off. â€œThe robustness of the procedures has been verified during the early phase of the specification by using Failure Mode Effects Analysis (FMEA) as well as reference implementations through virtual prototypes. For example, to verify Ring Break Diagnosis behavior the functional and timing behavior was modeled and executed in over 100,000 test sets that use well-known methods from System-on-Chip (SoC)-Verification. These measures help to simplify risk assessment and increase confidence in the readiness to apply the new technology,â€ says a MOST press release.Â

Another issue that has been dealt with by the MOST Specification Rev. 3.0 is easy migration of the standard. This provides a significant cost benefits. Existing applications can easily be reused in the new network just by modifying their network interfaces. â€œMOST Specification Rev. 3.0 supports the new MOST150 Physical Layer with a bandwidth of 150 Mbps that allows carmakers to continue to use POF and LEDs as light sources. They can continue to use their established optical wire harness and assembly processes. This makes the transition to higher bandwidth networking a smooth evolution and leads to a high acceptance,â€ says MOST.

The MOST Cooperation consists of 16 international vehicle manufacturers and more than 70 key component suppliers. The MOST Cooperation was founded in 1998 to standardize MOST Technology as a global standard for multimedia networking. Audi, BMW, Daimler, Harman/Becker and SMSC are its core partners and constitute its Steering Committee. The MOST Cooperation endeavors to help automobilesâ€™ electronics to â€˜talkâ€™ to each other. Such as, for example, when a car telephone needs to interact with the stereo system to mute it when a call is made or received. Or when voice controlled and hands-free speakerphones require a microphone to digitize voice. Or display systems are needed for navigation information and DVD playback. The MOST Cooperationâ€™s members work closely to enable all these and more by developing and standardizing the technologies.Â

The features of MOST make it suitable for any application, inside or outside the car that needs to network multimedia information along with data and control functions. MOST not only defines the physical interconnection between devices but also specifies and standardizes a lean embedded communication protocol and software framework that simplifies the development of complete systems and applications to distribute and manage multimedia contentÂ

Automotive Industries interview with Dr Christian Thiel, chief spokesperson for the MOST Cooperation.

AI: MOST is the de-facto standard for multimedia and infotainment networking in automobiles â€“ how has this happened and what were some of the challenges the cooperation faced?Â

Many car companies have decided to use a multimedia network to drive the conversion to fully digital systems in order to provide their customers more features at lower cost. They have compared different technologies and have pretty uniquely decided for MOST.Â

This certainly has several reasons. On one hand MOST is a great technology with unique features, high bandwidth efficiency, flexibility and low cost. But that has not come by accident. The continuous input of the MOST Cooperation members has formed the technology to serve up the answers to the requirements of the car makers and their suppliers. It is a technology optimized for automotive. In addition, MOST comprises all layers of the ISO/OSI model. It is not a do-it-yourself kit where you get a data transport mechanism and have to do the rest yourself. It provides a complete solution package. An admittedly weak indicator of what has been put together is the fact that the specifications that MOST Cooperation has created and maintains comprise of nearly 4000 pages. They are the result of over 10 years of hard work.Â

All that has been made possible through the continuous effort that many people in different companies have put into the idea of making the technology a success and a global standard. MOST Cooperation has never been a loud and publicly very visible standardization activity. But with the steady contribution from people that also inside their companies are in charge and strong support by their management, step by step this success has been built.Â

A major challenge has been that â€œin automotive nothing takes offâ€ to quote Russ Shields from the October Hansen Report. â€œThings are creeping up.â€ It took way longer than we initially expected to get to mature specifications. It takes a lot to get a technology to the maturity level that the car makers require. In between there was a long and stony roadway without much glory but a lot of work for those who worked on the specifications, their implementation and verification. I want to take this opportunity to thank them.Â

Another challenge, especially in the beginning was to build the necessary trust between naturally competing companies that it is possible to work together on an infrastructure technology that provides no potential for differentiation. There were pretty tough discussions from time to time. We were able to overcome those issues because the people kept working together despite all difficulties of a competitive environment.

AI: How is MOST being deployed in vehicles from major automotive OEMs around the world?Â

Like many other automotive technologies, MOST has started out in European luxury brands and in each brand in their top product line. Step by step it has been migrated down into the lower end cars of those brands. Last year, Toyota has launched their first car with MOST. Meanwhile they have 4 models on the road with others to come soon. Hyundai, Kia and also SsangYong followed just a couple of months behind. The step out of Europe and into Asia was very important as it shows the strong potential of MOST to become a truly global standard. As a next step we expect European and US volume makers to jump on the MOST train.

AI: Please tell us a little about the MOST Physical Layer Compliance Testing and Recommendation.Â

There are two sets of test specifications for a MOST device with regard to the Physical Layer. The Physical Layer Compliance Test Specification defines tests that each device must pass in order to prove that it fulfills the MOST specifications. They are mandatory. If a device passes them as well as the so-called Core Compliance tests, it gets listed as a valid MOST device and enjoys a license in the necessary patents of the MOST Cooperation members.Â

Furthermore there are optional test specifications which we call â€˜Application Recommendationsâ€™. They typically have their origin in in-house quality specifications of one or several car makers. They exist because the originator has decided to share his implementation experience with the MOST community. An example is how to handle an optical wire harness reliably in a car makerâ€™s process chain. The fact that these in-house standards are being shared is a strong proof of the cooperative spirit that exists within MOST Cooperation.

AI: What is the significance of the MOST Specification Rev. 3.0 and what are some of the other technologies you will be announcing shortly?Â

The MOST Specifications Rev 3.0 are the outcome of a 10 year process of specifying, implementing, reflecting and improving again and again. They are the result of constant contributions of hundreds of people in dozens companies that put their effort into MOST Cooperation. They are a proof of a living standard that people believe in.Â

Over the next years, the new MOST150 technology and the MOST Specifications Rev 3.0 will be implemented and we will again collect the experience people make and continuously further improve the standard. And eventually of course it will be time to start the work on the next speed grade of MOST.

AI: What do you think future automotive infotainment networks will be like?Â

Of course they will provide higher bandwidth. That bandwidth will need to be developed in parallel to the application requirements as it makes no sense to put a lot of money into the cars for infrastructure that is not needed just to be future-proof.Â

I also tend to think that future infotainment networks will be optical. It simply is not cost effective to run shielded cables in a car. Optical technology is cheaper today and still provides a lot of room for further cost reduction. And transmission over unshielded cables will have its natural limit forced by the laws of physics. This limit can only be shifted to higher data rates by throwing lots of money on it in form of on-chip processing, filtering and shielding inside the device. Also there is a natural point where optics are cheaper.Â

Future infotainment networks will have to provide versatile means of transporting all kinds of data and digital signals that will occur in future infotainment systems. It will not be sufficient to just support one type of data transport. As those networks constitute the backbone of the infotainment system on which the car maker builds his features for many years, they need to be as flexible as possible to support applications that we do not even know today through a variety of transport mechanisms.Â

A strong influence on future networks will come through driver assist functions that more and more grow together with the infotainment system and put new requirements onto the network such as real-time camera signal transmission and extended reliability and fail-safe operation.Â

The new MOST150 provides good answers to all those requirements but of course it will only carry us through a couple of generations of cars and then we will need the next step.

Impacts and opportunities from the pandemic in Asian automotive market