In partnership with international corporations Midroc and OCAS, the Swedish Energy Agency and the Volvo Group are investing SEK 200 M (£ 15.7m) in Volvo’s development of fuel cells. The investment will create around 100 new positions in the Gothenburg region within the next three years.

In the autumn of 2009, Powercell Sweden will need to recruit around 60 people in an entirely new plant in the Gothenburg region. Per Wassén, who is Investment Director at Volvo Technology Transfer and chairman of Powercell Sweden AB, foresees that the company will create around 100 new jobs within the next three years.

“We are immediately going to start hiring qualified people for production, product development, marketing and sales”, says Per Wassén.

A fuel cell resembles a small battery. It is charged with hydrogen gas and converts this into electricity, water and carbon dioxide through a chemical reaction. The areas of use can be power supply units for households, trucks, boats, radio masts in remote locations and electric hybrid vehicles. Compared with normal diesel or gas-powered engines, fuel cells produce significantly less carbon dioxide and no emissions at all of particulates and nitrogen oxides. In addition, they are more efficient, smaller and lighter.

“I am immensely proud that we are building this company on a technology that has been developed by Volvo for 15 years”, says Per Ekdunge, CEO of Powercell Sweden.

The company Powercell Sweden AB is based on two patented components: a fuel converter (reformer) and a PEM fuel cell – the type of fuel cell most often used in transport applications. The fuel converter produces hydrogen gas from bio fuels such as ethanol, DME (Dimethyl ether), biogas, methanol and biodiesel, but also from regular diesel or gasoline. The PEM fuel cell then converts the hydrogen gas into electricity.

“Thanks to our reformer technology we are now ready to start our production without having to wait for an infrastructure for the distribution of hydrogen gas. This is truly a major step in the development of fuel cells”, says Per Wassén. 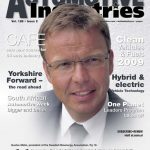