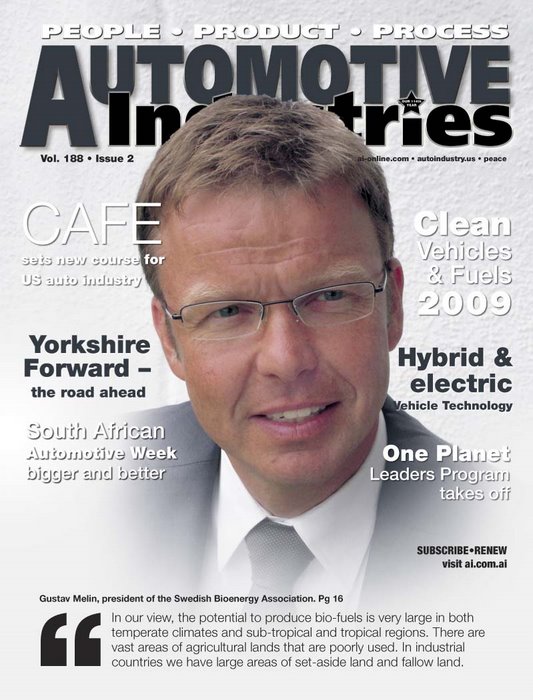 INTERVIEW – Sweden has been at the forefront of the global race to find alternative and renewable energy sources. The European Union Renewable Energy and Climate Change package proposed that each EU member increase their share of renewable energy by 2020. Sweden’s self-imposed target is 49 per cent – the highest in the EU. The country has always been a leader in alternative fuel sources as the country has hardly any fossil resources.

After the oil crisis in the 1970’s, Sweden decided to break the link between economic growth and increased greenhouse gas emissions by switching to renewable energy. Sweden’s GDP grew by 48 percent between 1990 and 2007. During this period greenhouse gas emissions decreased by 9 percent while the use of bioenergy increased by 79 percent, from 67 TWh to 120 TWh, accounting for just over 28 percent of the Swedish utilized energy demand.

Sweden’s role as a pioneer in alternative fuels, is reflected by the country’s royal family which has long championed the causes of climate change and environmental issues. So it is not surprising that the World Bioenergy – Clean Vehicles & Fuels conference and exhibition being held between the 16th and 18th of this September, is being inaugurated and patronized by His Majesty King Carl XVI Gustaf of Sweden.

Held biennially the most recent World Bioenergy in 2008 had 200 exhibitors that attracted 5700 visitors. Last year’s trade fair and conference differed in several ways from the previous two World Bioenergy events in that the fact was reiterated that bioenergy is not just a climate project but a necessity for global growth.

“Climate change, security of supply and demonstration of ways to reach EU 2020 renewable energy and emissions reduction targets, are all issues likely to dominate the presidency agenda. In this respect Sweden serves as role model, being a world renowned leader in pioneering and implementing renewable energy system solutions. And, by hosting a top level EU energy round table meeting during the event, it is this leadership role that the Swedish Energy Agency intends to further develop. Especially as World Bioenergy – Clean Vehicles & Fuels conference takes place in the lead up to the UN climate conference in Copenhagen in December 2009,” say the event organizers.

AI: What are the socio-economic drivers behind the implementation of bioenergy projects in Sweden?

(GM) The key drivers behind Swedish bioenergy development, which has been quite remarkable over the last twenty years, have mainly been political. After the first oil crisis in 1973, and even more after the second oil crisis in 1979, Swedish politicians decided to reduce our dependency on oil. At that time we had an oil dependency of 70 percent, and it was all imported. Also, in the seventies and eighties, we had a raging public debate over nuclear energy, and a decision was made to decommission nuclear power by 2010. These lead to an active search for alternative energy sources. Bioenergy, including wood fuels, peat and waste, was the first choice as Sweden has abundant bioenergy resources and a well developed forest industry.

The first step was to convert use of fossil fuels, and particularly oil, in district heating, and expanding district heating to more cities and towns. Today more than half of all space heating in Sweden is based on district heating, and two thirds of district heating is fired by biomass fuels. The next step was support for biopower production and introduction of green electricity certificates stimulating more combined heat and power (CHP) along with wind power. The third step was biofuels for transport, supported by tax exemptions for renewable fuels and mandatory legislation for filling stations over a certain annual fuel sales volume to provide at least one alternative fuel for consumers. This has helped fast track the E85 distribution infrastructure.

Today 28 percent of the end-use of energy is bioenergy whereas the total share of renewable energy in the Swedish energy mix is 44 percent. The other big renewable source is hydropower. In summary the main political incentives used in this process is a high carbon tax on fossil fuels (Polluter Pays Principle), green certificates to stimulate renewable electricity, tax exemptions for biofuels in transport and, at times, tax rebates for consumers to stimulate market adoption of renewable technologies such as wood pellet burners to replace oil fired domestic heating. In addition investment grants and support for research and development are available in some cases.

AI: Please tell us about the integration of energy recovery into solid waste management regimes.

(GM) Sweden early on (in the early nineties) adopted the waste hierarchy of first reusing, then recycling, finally using the rest waste for energy (power and heat). The producers have a primary responsibility to recycle (glass, paper, metals, packaging, electronic equipment, etc). Landfill is prohibited for combustible waste since 2003. Household waste can either be sorted and the biodegradable fraction used for biological recycling (biogas or compost production), or the household waste can be used for heat and power production. Incineration without recovery of energy is not done. And landfill sites are now only used for certain kinds of industrial wastes. Recycled wood, demolition wood, and wood waste from parks and gardens are important fuels for the district heating and CHP plants.

Today there are around 30 large heat plants, most of them also combined heat and power plants (CHPs), using municipal waste for energy. Yet a number more use recycled wood and other waste products. We consider the emission problems with waste combustion as solved. The emissions of dioxins are only a fraction of what they used to be, due to improved combustion technology and flue gas cleaning.

AI: What is the impact of international trade in bio-fuels? How can countries secure a sustainable supply and demand of these fuels?

(GM) In our view the potential to produce bio-fuels is very large in both temperate climates and sub-tropical and tropical regions. There are vast areas of agricultural lands that are poorly used. In industrial countries we have large areas of set-aside land and fallow land, e g in East Europe and in the EU member states. In many tropical areas we find land used for extensive grazing, or agricultural areas with very low productivity. Biomass for bio-fuels holds great potential for development of agriculture, higher incomes for many countries, and substitution of fossil oil imports and reduced oil dependency. Trade in biofuels, both liquid and solid (such as wood pellets) will grow fast in the coming years. These fuels will become important commodities in international trade, and we need to develop standards for them. Certification of sustainability should be done on a global scale, to be implemented by the market actors. Such an initiative has been taken in ISO – the International Standardisation Organisation. It is important that both consumers and producers are engaged in this process. Parallel to this process we have to work for better protection of rainforests and other areas of high natural conservation values. Sustainability criteria and environmental protection measures have to apply equally to biomass used for different purposes – for food, feed, fiber and raw materials – as well as for all energy sources.

AI: Please tell us about the emergence of bio-refineries – how will the co-production of fuels, chemicals, power and materials evolve?

(GM) Don´t forget “heat”! It is important that also excess heat from bio-refineries can be used for district heating or other purposes to ensure good total economy and energy balance.

We see a number of developments. Pulp and paper industries today can produce heat and electricity, plus solid fuels, and substitute all use of fossil fuels in their processes. They can in fact be “net exporters” of energy: electricity, heat, solid, liquid and gaseous biofuels. One of Sweden’s largest pulp factories will reach this stage in the near future.

We also see combined use of energy, raw materials and residues by docking heat and power plants with ethanol factories and biogas production. Such a “combinate” already exists in Norrköping, and there are plans for more. In northern Sweden, in Sveg, the basis for the “combinate” is a wood pellet factory. Ethanol production, power production and district heating will be added. To enable the use of excess heat, greenhouses for vegetables and flowers are also planned.

AI: How do you see the development of markets for clean vehicles and vehicles growing? How can developing nations be part of this growth?

(GL) We have seen a development from flexi-fuel (petrol/ethanol) and bi-fuel (petrol/gas/biogas) cars to biofuel hybrids or biofuel plug-in hybrids, combining renewable fuels with high efficiency. We see higher levels of “low blend” both in petrol and diesel in the coming years, and developing markets for high-blends, both ethanol and biodiesel. Also certainly in Sweden, a renewed interest for biogas as a vehicle fuel with a simultaneous expansion of biogas production and upgrading capacity, expansion of refuelling and distribution points and increased range of vehicles both private and commercial in the marketplace.

An interesting development is ethanol for heavy trucks using diesel technology and electric hybrid potential in plant machinery such as forest forwarders. We also note that pure battery electric vehicles are coming into the market place and as a result new strategic alliances or business models between vehicle manufacturers and utilities appearing.

It is important to combine the energy efficiency of electric motors with the good climate gas efficiency of biofuels to reach maximum reductions of climate gas emissions. To reach this we also need more renewable electricity production. One major problem is that many of these new technologies are expensive. The investment cost for the vehicles will go up, while the cost for the fuel will be reduced in the long run. This can be a major obstacle, particularly on the markets in developing nations. We need to pay more attention to reducing cost of the new technologies.

Our experience from co-operating with other cities in Europe show that cities can start a market development of clean vehicles and fuel and that is possible for a city to influence the market spread of clean cars. The power of public procurement is a very effective driving force towards sustainable transportation.

Ai: What are the aims of the REN Alliance and what would be World Bioenergy Association´s role within this alliance?

(KN) The overall goal of the International Renewable Energy Alliance (IREA) is to promote policies that enable the increased use of renewable energy through collaboration, removal of market barriers, identifying and promoting successful implementation strategies, developing markets and improving business conditions. The provision of reliable and up to date facts, to enable better and more informed decision making on all levels, is also a key issue.

In 2008 the World Bioenergy Association (WBA) was formed in an effort to provide the wide range of actors in the bioenergy sector, including national and international bioenergy associations, a global organization to support them. In particular assistance to address a number of issues including certification, sustainability, standardization, bioenergy promotion, and the debates about bioenergy’s impact on food, land-use, and water supplies. For a number of these issues working groups have since been set up.

The WBA strongly believes that together we can achieve more than we can individually and we are delighted to join the REN Alliance looking forward to working closely with the other members. In addition we consider this an opportunity to further strengthen the important role of bioenergy as part of a worldwide renewable energy system. Not least within the emerging areas of biofuels for transportation. Having all global renewable energy associations working together helps ensure security of supply as well as several general environmental benefits. When we act together in the REN Alliance we can demonstrate the powerful potential of renewable energy, correct false information and give a positive picture of renewable energy based on true facts.

Impacts and opportunities from the pandemic in Asian automotive market 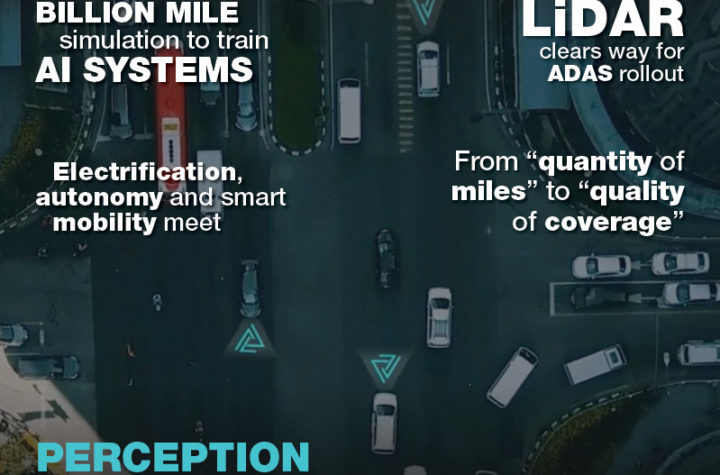