Located near the company’s old headquarters in southern Troy, Michigan, AxleTech’s new facility encompasses 210,000 square feet and will be staffed by nearly 200 production and professional employees. The new facility will house the product development and manufacturing groups for AxleTech’s original equipment and aftermarket equipment business as well as the company’s gear and brake operations.

“AxleTech has experienced steady growth over the last few years and our new headquarters facility will enhance our ability to produce, deliver and service high-quality products for our customers worldwide,” said Mary Petrovich, general manager and senior executive of AxleTech. “The co-location of AxleTech’s expertise in design, development, testing, sales and service in our new Troy facility will allow us to exceed customer expectations for customized applications and speed to market.”

“AxleTech is adding skilled workers, helping Michigan to lead in advanced manufacturing, and providing more proof that fighting for the auto industry and its workers while it restructured was the right thing to do for Michigan jobs,” said Rep. Peters. “We need to do everything in our power to fight for companies like AxleTech that are investing in America and creating jobs in America.”

The new AxleTech facility will initially house three major functions. First, the new facility will be a global distribution center for heavy-duty commercial and military vehicle parts. Over 30,000 parts will ship annually from the new facility to sustain and service vehicles around the world. Second, the company’s assembly operation for truck trailer brakes will now be located in Troy. Combined with the manufacture of original equipment brake systems in Troy, AxleTech’s Truck Trailer Transit brake assembly operation will provide parts and remanufacturing services for a variety of customers including operators of buses and other vehicles from municipalities across the United States. Third, the company’s new engineering and technical center will provide customers with timely product prototyping, testing, development and quality assurance in one location.

AxleTech International is a global manufacturer and supplier of axles, axle components, planetary axles, brakes and aftermarket parts for commercial specialty trucks, military vehicles and off-highway machines used in the construction, material handling, forestry, mining and agricultural markets. More information about the company can be found at its redesigned website, www.axletech.com. 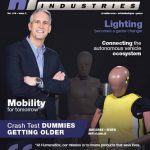