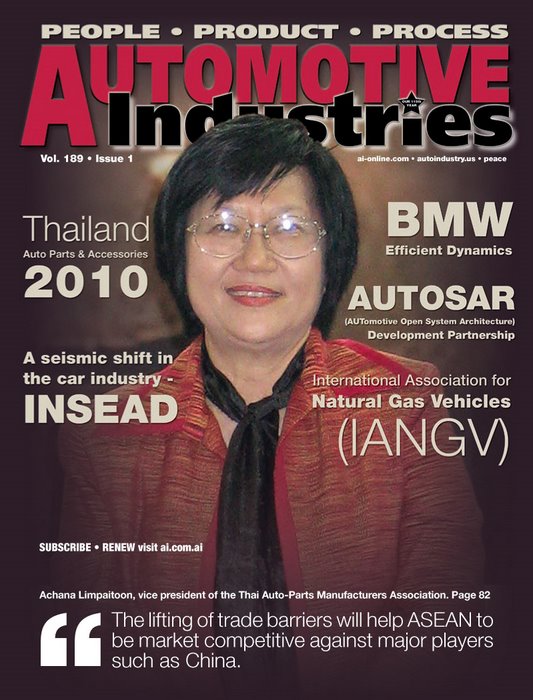 Thailand is fast emerging as the automotive hotspot of the Asian region, despite the 2011 floods which cost the counÂ¬try over US$45-bn.

The automotive industry is the third-largest sector in the Thai economy, accounting for 12% of GDP. The automotive industry is Thailand’s third-largest industry, employing over 300,000 people. Globally, Thailand ranks No. 12 among automotive manufacturing countries, producing 1.64 million vehicles in 2010. It aims to reach 2.3 million units by 2014, which would put it among the top 10 automotive manufacturing countries worldwide. Japan is the biggest destination for Thai-manufactured automotive products. Components make up 63% of Thailand’s automotive parts exports, followed by body parts at 17% and engines at 12%.

With government-led support, automotive has evolved into an industry with vibrant foreign OEM competition, and an extensive network of related and supporting industries. Thailand’s long experience with automotive manufacturing has resulted in a comparatively low-cost yet experienced labor force for the automotive industry. Thailand currently has approximately 690 Tier 1 auto parts suppliers and 1,700 Tier 2 and 3 suppliers.

More than half of the Tier 1 suppliers are multinational firms. Of the top 100 auto parts manufacturers in the world, 50% have factories in Thailand. The country’s manufacturing base is strong enough to supply all necessary parts, from engine parts to interior and body parts. According to official estimates, Thailand’s automotive industry export value in 2010 was US$13.5-bn, split equally with half from CBU cars, pickups and motorcycles and the other half from auto parts. This makes it Thailand’s third-largest export sector after electronics and electrical appliances. Parts imports were around US$7.8-bn in 2010.

Several multinational automotive manufacturers have recently invested in Thailand. Ford has set up a US$450-million plant with an initial annual capacity of 150,000 passenger cars, with production starting in 2012. US$133-million factory expansion to 200,000 units per year includes its international multipurpose vehicle. Following expansion at its Ban Pho plant, Toyota reached a milestone by producing its five-millionth car in Thailand.

The country is also moving toward the production of more fuel-efficient vehicles, including hybrid, plug-in hybrid, and electrical and fuel cell-powered models, with the introduction of special reduced excise tax rates for those vehicles. Thailand is the first country in the ASEAN region to build hybrid vehicles â€“ Toyota began manufacturing hybrids in the country in 2009 in a factory fueled by natural gas. Similarly, in 2010, Nissan introduced its March model claiming it as Thailand’s first eco-car as it demonstrated its fuel economy by travelling more than 1,000 kilometers on a single tank of gas.

Mitsubishi has a US$500- million eco-car manufacturing plant in Chonburi Province. At the same time, this is the company’s largest-ever investment in Thailand and its biggest facility outside Japan. Chevrolet Thailand’s plant in Rayong has been awarded landfill-free status certifying that it produces no waste for landfills and recycles for reuse. Audi, Volkswagen and Navistar, a manufacturer of commercial and military vehicles, each recently expressed an interest in building production plants in Thailand. Mazda began delivery of its Mazda3 2.0L car to Thai customers in June 2011. Tata ramped up its domestic truck models in September 2011, adding to its local presence of one-ton pickups.

Thailand’s success in the automotive sector is due to the fact that the country boasts an excellent infrastructure. The country has an extensive road network â€“ the largest in the ASEAN region with the government planning to further boost inter-city motorways. Plus the country has a large pool of skilled workers.

In order to help the automotive industry recover from last year’s massive flooding that crippled production in many factories, the Thai government offered the industry exemption from import tariffs on parts, machinery and completely built units (CBUs) for eight months. Tariffs on parts range from 0-30%, while that on machinery is 0-5%. The country also benefits from open trade with and ongoing growth in the auto markets of its neighbors in ASEAN, whose 10 members have a combined population of nearly 600 million people. Thailand enjoys a tax exemption for automotive parts through the ASEAN Free Trade Area agreement. Free trade agreements with Australia, New Zealand, China (another 1.3 billion consumers), and India also have created market opportunities for Thailand.

Automotive Industries (AI) asked Vasana Mututanont, Deputy Secretary General, Thailand Board of Investment (BOI), what are some of the incentives offered by Thailand to companies wishing to invest in its automotive sector.

Mututanont: The BOI grants qualifying companies both tax and non-tax incentives such as exemption/reduction of import duties on machinery, exemption of corporate income tax, and on import duties on raw or essential materials used in exports. Non-tax incentives include giving permits for foreign nationals to enter Thailand, allowing them to bring in skilled workers and experts, permission to own land and remit money abroad. For the automotive sector, there are further incentives for investment such as a corporate tax holiday in special economic zones, further exemptions on import duties on machinery and other incentives.

AI: What impact in terms of fall in production/exports did last year’s floods have on Thailand’s automotive industry?
Mututanont: The floods impacted few companies, like Honda, who had to suspend their production in Thailand but today many have returned to normalcy. For example, Honda reopened its facility in March 2012. However, it is inevitable that the export/ import value of Thailand’s automotive industry has gone down from the previous year. There has been 0% cent growth in exports â€“ car exports are down 14%, although motorcycle and auto parts have grown by 23% cent and 14% respectively.

AI: Tell us a little about the duty exemptions being offered to automotive manufacturers and how this has helped the industry bounce back from the 2011 floods.
Mututanont: The government and the BOI implemented relief measures in order to facilitate flood-affected investors to help them recover as soon as possible. These measures included allowing machinery and raw materials to be moved from factories to other locations or even exported in case of emergencies without permission â€“ permission could be sought later from the BOI. BOI-promoted companies are entitled to duty-free import of machinery to replace existing machinery damaged by flooding. Applications for this incentive are required to be submitted by the end of June 2012. Other measures include allowing duty-free import of raw materials and allowing BOI-promoted companies to outsource part of their manufacturing process temporarily to avoid business interruptions. Plus certain tax incentives have been provided in rebuilding damaged properties.

AI: Thailand offers good infrastructure in the ASEAN region to automotive manufacturers â€“ tell us a little about the industrial parks such as the Eastern Seaboard Industrial Estate and others that provide the requisite infrastructure to automotive manufacturers.
Mututanont: BOI promotes Thailand on the unique selling point of the high-technology and skilled machinery used to build infrastructure. The location of the industrial parks is regulated to stay away from residential areas to avoid any irritations or health problems that might occur between industries and our people.

AI: How have the automotive industry clusters in Thailand helped attract investments into the country?
Mututanont: BOI has carefully designed our industrial parks by grouping the same type of industries in the same area to create a cluster of industries. The cluster allows for a convenient facilitation of supply-chain among companies. The cluster also mitigates any complications in transporting vehicle parts. It cuts transportation costs and any risk of damage that might occur during transportation.

AI: How do events like SUBCON Thailand 2012, help the Thai automotive industry? What are some of the issues that are highlighted at the event?
Mututanont: SUBCON Thailand 2012 is an industrial subcontracting exhibition held by the BUILD (BOI Unit for Industrial Linkage Development) unit of the BOI in cooperation with UBM Asia (Thailand) Company on May 17-19, 2012.The exhibition has been continued for six years since 2007. Its objectives are to showcase Thailand’s industrial sub-contracting potential and promote the country as a regional production hub. It helps expand business opportunities for Thai investors especially SMEs to present their production potential and seek new markets. SUBCON also helps publicize the government’s support to investors and helps build confidence in Thai products and industries.

Sibunruang: Thailand is currently the production hub of almost every top brand, and is universally recognized as a production hub of global niche products such as one-ton pick-ups, high quality motorcycles and the Eco car. The latter is considered one of BOI’s new focal points â€“ Thailand recognizes the benefits of the Eco car project which include benefits to the development of the automotive industry, benefits to vehicle parts industry and to Thai citizens in general. The capacity of Eco cars is slated to go up to 2.5 million cars by 2015.

AI: Where do you see Thailand in the ranking of global automotive manufacturing regions in the next five years?
Sibunruang: Thailand promotes a government policy of the â€œInternational Carâ€, which gives equality and freedom to automotive investors, both Thai and foreign. The government aims that in the long term the Thai auto sector should develop in the same direction as the global automotive industry. This direction includes enhancing automotive power potential, and creating an automobile that can be driven by electric motors. The vision of the Thai automotive industry is â€œThailand is the automotive production base in Asia that adds value to the country with strong domestic supplier baseâ€.

AI: What strategy do you have to achieve this target?
Sibunruang: The ministry of industry has developed three strategies:
â€¢ Defining directions and building new opportunities,
â€¢ Increasing standard and research,
â€¢ Building quality workers and investors.

To support the enhancement of the automotive industries, which is anticipated to have a production capacity at 3 million cars in 2014, the government, led by Ministry of Industry, has allocated a budget to development projects. In 2011, the projects are namely JTEPA (workforce development), SMEs domestic progress renovation and so forth. Moreover, the government is promoting Automotive Human Resources Development Institute Project or AHRDIP which is under the cooperation with Japan. The project is to project Thailand as the sustainable global production hub with quality human resources.

Fuelling mobility from present into the future

Designing machine tools for the future

Building cars for the Millennials
Share Your News with Ai