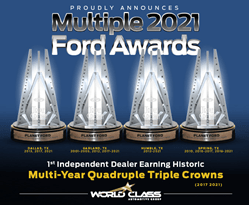 The first time it was announced in 2018, it was an unprecedented event for
an independent Ford dealer to earn this award at every single location
within the same year. After earning it four times over for 2017, the Reed
family of dealerships earned quadruple triple crowns, again, for 2021.

According to Ford, only 36 dealerships nationwide won the Ford Triple Crown
for 2021. Of those, Randall Reed’s family of Ford dealerships achieved
earning four of the 36, and that is out of nearly 3,000 Ford dealerships in
the country.

“When our amazing team first achieved this accomplishment, it was said to be
a billion to one odds chance of it happening. Now, our Planet Ford locations
have done it twice,” said Randall Reed, owner of World Class Automotive
Group.

To receive the highly sought-after Triple Crown, each dealership had to
receive all of Ford’s top awards, which include the President’s Award for
customer service; One Ford Elite for excellence in Sales, Service or Parts;
and the Ford Customer Service Premier Club. All of the World Class
Automotive dealerships, including Bill Fick Ford in Huntsville, Texas, have
garnered the Ford President’s Award, year after year.

“For over 30 years, our family has proudly served our community always
treating our customers like one of our own family members,” said Shelby
Reed, President of World Class Automotive Group. “Our team not only works
hard to meet our customers ‘every auto need, they care that our customers
are happy and totally satisfied.”

Sherry Reed, co-owner of World Class Automotive Group agrees, “We’re
thankful that our customers trust us with their auto needs. Helping people
and making them happy is what our dealerships are all about.”

*Based on retail ford sales reported by Ford annually since 1998. 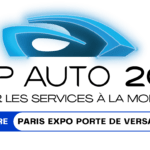 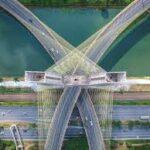 Sallaum Lines Invests into the Future of PCTC 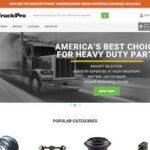 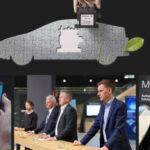 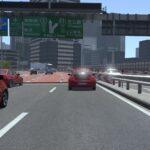