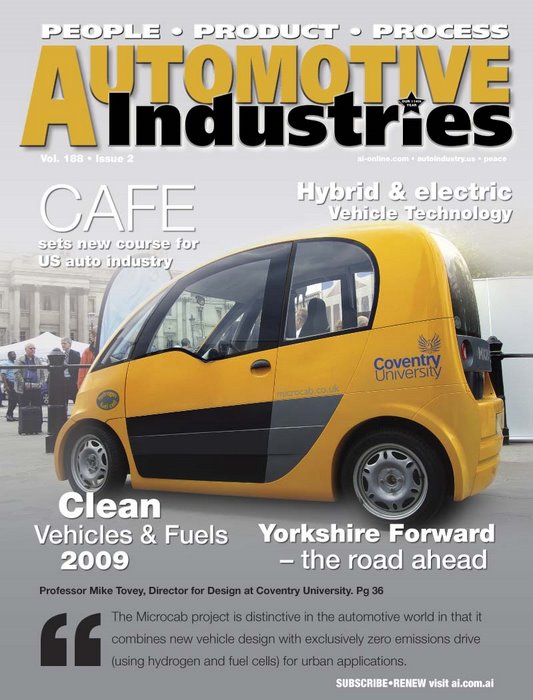 INTERVIEW – Recently, the United Kingdom’s postal delivery service, Royal Mail, inducted three hydrogen-fuelled vehicles. This was a major event since outside North America, few if any postal services use hydrogen-fuelled vehicles. For Coventry-University, whose spin-off Microcab designed one of these hydrogen-run vehicles, it was a time for celebration. Coventry University is part of the consortium made up of Microcab (founded by Coventry University design tutor John Jostins), RDM Automotive, a car components firm, Delta Motorsport and Silverstone.

Coventry University is renowned for excellence in automotive design. It was voted the best design school in the world in an international symposium in 2004 plus it received the Sir Misha Black Award in 2006. And in 2007, the university won the Queen’s Anniversary Prize for Further and Higher Education in 2007 for its design courses specializing in automotive design.

Part of the reason for Coventry University’s importance as a centre of excellence in automotive design, is its facilities. “We have facilities which we believe are unique to any university in the world. These include our Bugatti Building (supported by the Bugatti Trust) which houses a full size vehicle design and styling studio, which supports detailed surface prototyping. It sits alongside full size stereo VR facilities. This has allowed us to work with a number of transport companies many on a basis of commercial confidentiality, and including a wide range of applications from the design of bespoke SUVs to specialist diving equipment,” said Professor Mike Tovey, Director for Design at Coventry University in an earlier interview to AI.

“Some of the work is student related, and it can involve multinationals such as Renault and Fiat. The design and development work is often with smaller specialist companies such the leading edge hydrogen fuel cell powered Microcab for which we have been a core partner holding an equity stake. We also have fully equipped engineering workshops and laboratories, where particularly in the area of emissions we are conducting leading edge research,” he added.

Coventry University’s Automotive Engineering Applied Research Group or AEARG, was established in 1993 to be a nodal agency for automotive related research in the faculty of engineering and computing. Its research activities include engine and emissions research, motorsport engineering, vehicle studies, passenger safety, vehicle handling assessment, aerodynamics, cooling systems, intelligent transportation systems and vibro-acoustics. The AEARG has received support from the UK’s Department of Trade and Industry as well as the Engineering and Physical Sciences Research Council and from the automotive industry and its suppliers. Collaborative programs have been undertaken with ArvinMeritor, Daewoo, Dunlop Tyres, the Ford Motor Company, Jaguar, Johnson Mathhey, Land Rover, Lucas, Mira, the Rover Group and Siemens.

“There is a close link between both our commercial design work much of it brought in through our Design Hub link on our technology park, and the postgraduate student work at M.Des, MSc and MA level. Each year we run a number of projects in collaboration with companies which form a core part of the programs of study. In recent years the post-graduate students have worked with Renault, Ferrari, Mazda, Fiat and Modec. Specialist companies such as Solutia Europe have also been involved. In addition we place students for work periods of typically six months in a range of companies, across Europe,” says Professor Tovey.

AI: Why did Coventry University receive a Royal approval in transport and product design?

Building on its reputation of more than 30 years, Coventry University’s Department of Industrial Design is continuing to pioneer new developments in the field. It is regarded as a centre of excellence by the HE sector internationally and by the automotive industry itself for its contribution to the education of tomorrow’s world-class designers.
Key to this success are its innovative industry-focused courses and applied research, which have been highly influential in helping to maintain the UK’s position as a leader in automotive design.

Professor Michael Tovey, Director for Design at Coventry University said: “Being awarded the Queen’s prize is a huge honour. The prize represents a real team effort by all the staff and students, not only by rewarding our past achievements, but in highlighting the depth of our current training, research and innovative deployment of digital technology.”

AI: Please tell us a little about how Coventry University plans to retain its premier position as a centre of excellence for automotive design.

With our established array of provision, activities and related initiatives the most effective way forward in the medium term is through evolutionary development. This will be pursued through both developments in our educational provision to consolidate and expand international components and widen the design course range, and in our applied research through confirming and enhancing our array of groups, centres and programmes in collaboration with industry. We believe that our USP is in automotive design concentrating on concept design, styling, package design, ergonomics and package engineering. We intend to expand our design facilities which are already unique amongst Europe’s universities, to support more aspects of vehicle engineering.

AI: Tell us about your university’s collaboration and product design work with Microcab Industries on the MICRO CAB H4 Microcab project

The original inspiration for this extended piece of work came about from a very practical realisation of urban congestion problems, particularly in large cities.

It has been a programme of research into alternative systems of mobility in these particular urban environments, focussing on very lightweight structures powered by means other than the internal combustion engine (knowing that oil reserves are finite and that these engines pollute and produce carbon emissions). A range of electric drive systems have been adopted for propulsion, initially using battery and solar power but gradually adopting fuel cells and hydrogen fuel in the more recent stages.

Whole vehicle design has always been at the heart of the Microcab project. Vehicles have been designed with specific purposes and users in mind (eg. Taxi). This allows all aspects of the vehicle to be revisited in conjunction with a more sustainable drivetrain. There are two aspects to the thinking here:

1) Vehicles can change with environmental pressure – they don’t have to be the same as vehicles we have already. Patterns of usage will probably change and this is an ideal time to offer up alternatives.

2) New drive systems offer new ways of packaging components in and around vehicles and therefore offer new potential for use of the space created.

This project has grown steadily in scale and stature as time progresses. It has allowed (and continues so to do) a range of conceptual experiments with alternative vehicles, fuels and drive systems in the face of global environmental concerns that are increasing in severity on a continuous basis, and are gradually being addressed globally by governments and industry leaders. The recent change in leadership in the USA has galvanised these ideas and given a new urgency to act. Barack Obama has made the environment, energy and transport a priority:

“As for our auto industry, everyone recognises that years of bad decision making have pushed out automakers to the brink. We should not, and will not, protect them from their own bad practices. But we are committed to the goal of a re-tooled, re-imagined auto industry that can compete and win.”

The future of individualised transport products will be in the integration of engineering and design innovation and, from that, a whole new genre will emerge for mass use.

As the Microcab project has developed over time, numerous partnerships with academic institutions, companies and other organisations have been formed to create a network of support structures, both in conceptual thinking and practical expertise in delivery of real products to prove particular concepts periodically by demonstration.

The project has been represented many times in the national media (BBC/Channel4/Sky TV, The Times, Guardian, etc) and internet, local press and local TV.

The Microcab project has had a significant rise in stock in 2008 as the unique project of a fleet of hydrogen fuel cell vehicles is now running at University of Birmingham. It is the only project of its kind in the UK and Europe. The Microcab project is distinctive in the automotive world in that it combines new vehicle design with exclusively zero emissions drive (using hydrogen and fuel cells) for urban applications.

It is an excellent example of Coventry University’s approach, focusing on vehicle design and making a real contribution to keeping the UK at the forefront of developments.