Since Indonesia regains investment grade status from Fitch Rating, the investments of many sectors are growing fast. A number of automakers including Toyota, Honda, Daihatsu, Mitsubishi, General Motors, Ford and Tata have raised their investment in Indonesia. Those companies have announced plans for the construction of new assembly plants that would roll out new models aimed at tapping the fast-growing Indonesian middle class. Auto sales in Indonesia are expected to reach 1 million in 2012, making it one of the world’s largest markets. The Indonesia government also approved to hit an eco-car project (Low Cost and Green Car). Indonesia would become a full-scale production base for hybrid-powered vehicle by 2020.

Indonesia is also becoming a more interesting destination for investors thanks to various factors, including government support. In 2010, Indonesia emerged as the largest ASEAN market for the first time with sales of 850,000 vehicles. Indonesian government designated itself as a major automobile manufacturing base for the ASEAN region. It plans to produce 1 million vehicles per year by 2013 and 2 million vehicles per year by 2020.
Indonesia takes the lead as the largest automotive market in the Association of Southeast Asian Nations region, with 2011 sales growing 16.4% from like-2010 to 890,410 units, an analyst reports.

Expansion plans at the national automotive industry has been realized in Q1/2012 to reach U.S. $ 2.42 billion, entirely carried out by Japanese investors. Here are automobile manufacturers in Indonesia that began to realize the investment expansion plan. Currently, the process has begun construction of the plant gradually.
Suzuki Motor
Suzuki Motor through PT. Indomobil Suzuki Motor will invest U.S. $ 782.63 million (Rp 7.13 trillion) for new production capacity of 100,000 units per year. With that addition, Suzuki’s total installed capacity in Indonesia reached 200,000 units per year. Investment is planned to be used to increase engine production capacity and increase the number of new models that include multipurpose passenger vehicle (MPV).

Toyota Motor
PT. Toyota Motor Manufacturing Indonesia has a mandate to realize the expansion of Toyota Motor with value U.S. $ 534.4 million (Rp 4, 81 trillion) to increase the capacity of 120,000 units per year

Honda Motor
PT. Honda Prospect Motor will complete the construction of a new plant in Indonesia valued at Rp 3,1 trillion (about 27 billion yen / U.S $ 329 million) to expand its capacity three-fold to 180 000 units per year.

Daihatsu Motor
PT. Astra Daihatsu Motor racing to held the capacity of expansion to add 100,000 units to 430,000 units per year. The new plant is targeted to commercial production fastest at the end of this year. “In October this year, the new plant expansion completed and began full production in 2013. Additional new capacity we can use it for anything good for the production of Xenia and Avanza, including for low cost and green car [LCGC)

GM and BMW
GM is preparing to invest US$150 million to re-open its assembly plant for a 7-seater van after seven years. According to GM, the plant would produce 40,000 vehicles per year for both the domestic and export markets, and BMW recently started local production of one of its luxury sedan models.

Here are short statistics for the March shows:
• 821 companies represented from 21 countries
• 10 international groups across the different sectors of the show (Malaysia, Taiwan, Belarus, Malaysia, China, Korea, India, Thailand, Indonesia, Singapore and India)
• 22,800 trade attendees from over 41 countries (last year: 27,100 professional visitors).
• Total area: 33,000 sqm.
INAPA 2013 Promise to Return Bigger and Better in 26 – 29 March 2013, JIExpo Kemayoran – Jakarta.
INAPA 2013 held together with Tyre & Rubber Indonesia 2013, IIBT 2013 and Heavy Equipment Indonesia 2013 (in focus Agriculture Equipment), from 26 – 29 March 2013, JIExpo Kemayoran – Jakarta, will be ASEAN’s Most Important Auto Parts, Accessories and Vehicle Equipment Event. The show will put up bigger and better as the Indonesia’s unparalled one-stop for the AUTOMOTIVE platform that can show the complete convergence of technology and products through value chain.

FORTECH Products Is Expanding Its Operations In Michigan

EMAL to focus on automotive industries with foundry aluminium 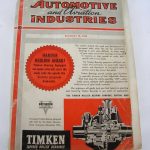