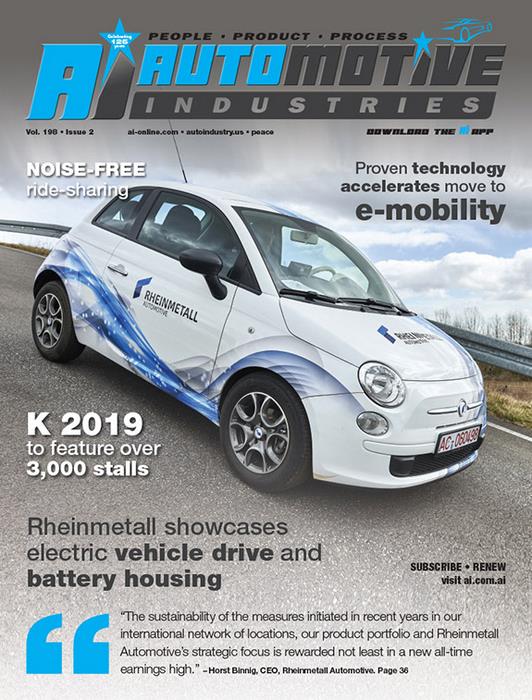 Rheinmetall Automotive, a first-tier auto-industry supplier and member of the Technology Group Rheinmetall AG, has launched its own range of components for electric cars, commercial vehicles and bicycles. The company’s advances in e-mobility were showcased at Auto Shanghai 2019.

Among the exhibits were a newlydeveloped 90 kW electric drive unit, as well as a new kind of modular battery pack. The systems are currently installed in a demonstration vehicle built around a sub-compact car. Based on a Fiat 500, the vehicle is named EMove (Electric Mobility Vehicle) and represents a milestone in alternative drivelines for the over 100-year-old German Tier 1 supplier of the Kolbenschmidt and Pierburg brands. The company has been involved in the electrification of vehicle components since 2004, when Pierburg subsidiary developed an all-electric pump for the main cooling system of six-cylinder BMW engines. At the heart of the EMove is a proprietary battery pack and a high-performance traction motor. When these are paired with a new electric driveline, the vehicle runs at up to 135 km/h and has a range of around 250 kilometers. These parameters are achieved without encroaching on the luggage or the passenger compartment space normally available in the series version of this vehicle. In developing the traction motor and battery pack, the manufacturer has quite intentionally opted for the areas of energy storage and electric drive systems plus their peripherals. In the case of the battery packs, it is pursuing a strategy that allows the integration and thermal conditioning of a variety of battery cell types, thus possibly attracting many of the OEMs. Both motor and battery pack were first displayed at IAA 2017.

Meantime, the demonstration vehicle has been assembled and has successfully passed its first driving tests. Rheinmetall Automotive sees this configuration tailored to future electric vehicles as a possible series-production project while allowing, of course, other arrangements to be assembled to address customer wishes. Powerful traction motor Powering the development work is a powerful 90-kW, liquidcooled, permanent-magnet synchronous motor that develops a torque of up to 230 Nm and can propel the vehicle to a top speed of 135 km/h. Its output and torque characteristics can be finetuned for different applications. The current design is tailored to smaller-sized vehicles. However, the system’s scalability allows it to be used in larger vehicles as well. Rheinmetall Automotive has opted for a synchronous permanent-magnet motor.

In order to reduce the space required for the motor it was decided to use concentrated coil winding. On Rheinmetall’s demonstration vehicle the motor is coupled to a multi-stage input gear unit. Specially protected underfloor battery pack The second development focus is a 29-kWh lithium-ion battery designed for modularity on electric vehicles. In the design of the new battery pack, Rheinmetall Automotive has worked from the premise that future electric vehicles and hybrids will largely use underfloor batteries which do not diminish the vehicle’s loading capacity to any major degree while offering advantages in terms of weight distribution and integration into the vehicle’s structure.

The basic structure of the modular battery pack is made from aluminum into which customer-specific battery modules can be integrated. This arrangement allows a high energy density in relation to weight and, thanks to its compact dimensions, permits flexible and wide-ranging use in electric vehicles. The structurally optimized base frame features coolant passages integrated into the bottom side to allow thermal conditioning of the battery during charging and discharging. One advantage of this design is a higher safety factor, as no coolant liquid flows in the battery. The battery pack comprises eight identical modules and weighs 180 kg. The packs are shielded from intrusion by a composite-fiber structure developed by an affiliate within the Rheinmetall Group that specializes in protection systems.

A heating/cooling module can also be seen as a component of the air-conditioning system of electrically operated vehicles. Equipped with a heat pump, it integrates existing units such as the drive motor and the generator as heat sources into the heat management system of the vehicle. Up to now, electric vehicles have mostly been temperature controlled by electric heaters, but this has a negative effect on the radius of action (range) and results in shorter operating cycles between recharging. E-bike Technology Group Rheinmetall has developed an e-bike through its start-up company Amprio.

Sweating the assets to leverage capital 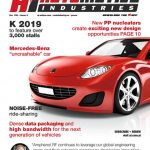 Data connectors for the next generation 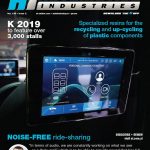 Technology allows passengers to share rides but not noise 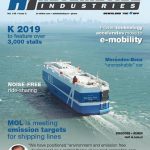 Shipping partnerships to reduce emissions
Share Your News with Ai