The car industry is facing the most dramatic shift in at least 50 years. As in 1974, the pressures associated with fuel consumption have intensified, but this time they will not go away and now they coincide with the serious emergence of the environmental protection issue and alternative technologies in the form of hybrid and fully electric engines.

Combine this with the fact that growth in this industry will come exclusively from Asia, not the USA and Europe. Western car manufacturers may have built nice businesses in Asia already, but only on a small scale and with the advantage of being light years ahead of the local competition.

This is all set to change. Western companies will have to address the tastes and needs of Asian consumers. Even the invincible knight Toyota has felt the pain from reduced demand in its largest markets, and moreover, while it once had the lead in hybrid technologies, it has been slow on pushing them further and is now vulnerable to being leapfrogged.

This is a time of great peril and great opportunity. Porsche—swallowed up by Volkswagen—has already disappeared as a standalone manufacturer, Saab is finally being closed for good, and the American car companies are retreating in global markets. Those who do not act quickly to address the triple industry shift will be left behind and may be permanently replaced by newly emerging Asian players. Size offers little protection, as was already truewhen Japanese manufacturers entered the US market, but which is being confirmed now when the US giants are fighting for survival and will emerge smaller.

Winning will require decisive moves in new directions. Time is of the essence, particularly because it takes two to four years to bring new models to the market. Top management must show leadership and align their companies along new paradigms. For example, Toyota has revised its strategy to become a leader in “sustainable mobility”. Its innovative fuel technologies converge with an environmental commitment that extends to product life-cycle footprints and all operations. BMW`s “efficient dynamics” strategy still enshrines driving pleasure from premium cars, but prioritizes that the pleasure should result from every drop of fuel—faster 0 to 60 m.p.h. sprints must pass the test of lower consumption compared with predecessor models.

But this does not imply that top managers can act like generals and order their companies to follow. Uncertainty is simply too high. Will hybrids take a large market share or not? (This question is open only in the medium term, as in the long run, the inherent technical disadvantages compared with fully electric engines will be decisive when the next breakthrough in batteries happens.) Or might hydrogen finally begin to deliver on its promise? Or will high-efficiency diesels achieve another leap and push electric engines back another few years? How fast will the Asian markets grow, and how effective will local competitors be? What will be the winning designs in Asia? No one knows, and market tastes will evolve. (The only thing we do know is that they will be very different in China, India, and central Asia.) In the face of such uncertainty, no one can simply decide what strategy to take. This would only be hit-or-miss (with disastrous results in the case of a miss), or require such a long time for analysis that it riskedfalling far behind. In sum, “command and control” of a fixed direction simply will not work.

This is a classic situation in which companies must undertake strategic experiments. First, the large players will not be able to avoid parallel trials,for example, having a fuel cell and a hybrid and a high efficiency diesel; launching cars for the global market and experimental locally designed cars in Asian markets(as illustrated by the experiments that Honda is showcasing in order to appeal to new users of cars). Pursuing such parallel technologies, models and market approaches will be expensive and should be done with deliberation—trials should not necessarily target short-term “success” but rather be used to learn about the market.

In addition, companies will have to experiment in an iterative fashion, for example, by launching a hybrid and seeing how it does, or launching a low cost car in India and learning about its weaknesses and strengths. Again, this is an expensive business, but when the market is moving so fast and so many consumers are new (indeed many of them have never owned a car before), you can’t rely on the old market research. You have to “probe and learn”.

This context requires a different leadership style from classic top-down management: (i) because the top team alone cannot steer this amount of experimentation, and (ii)it cannot know enough about opportunities for innovation and market requirements. Hence the situation requires using the entire organization as a problem-solving resource.

The problems are clear and can be articulated by top management, but the solutions reside in different parts of the organization, and middle and frontline management must be invited to propose them. Top management can put a portfolio together that fits with resource constraints, has the breadth to ensure appropriate exploration, and brings together initiatives that are complementary rather than conflicting. All this requires that the troops arebriefed on the strategic challenges and the logic of the strategy initiatives chosen. For example, R&D may propose prototyping certain promising technologies, local sales companies the development of models with certain key features, and manufacturing the use of local sites, platforms and suppliers. Again, in a time of strategic turmoil, the value of such a portfolio of initiatives lies not in maximizing the traditional (short-term)financial return, but learning about which technologies will win, where the growth will come from, and what the needs in the various markets will be.

When we studied manufacturing organizations across several industries in Germany to see how strategy was executed in companies that maintained global manufacturing competitiveness in a high-wage country, we found that 50% of strategic initiatives were generated bottom-up by middle and frontline management, rather than top-down. This could even go as far as questioning board-level goals based on exceptional bottom-up ideas and concerns (admittedly the exception rather than the rule, but the possibility existed). For example, in one organization the goal of the Business Unit was changed from a cost focus to a focus on reducing customer reaction time based on input from middle management. The logic of the change rested on customer value and the fact that the response time reduction achieved by process improvements led to lower costs in the long run. Conversely, we found that overly tight “alignment” along a fixed strategy hampered the innovation and change ability of the organizations.

So the leadership lesson in times of turmoil is this: A fixed strategy imposed from the top, no matter how brilliant, simply will not work because (a) it will probably be wrong when the markets as well as technologies are as uncertain as they are now, and (b) potential solutions to problems are distributed across the entire organization. Managers must become orchestrators rather than bosses, although this does not mean they can be weak—out of diverse ideasthey have to select and craft a direction.

Western car companies have both the technologies and the manufacturing capabilities needed. But the challenge ahead lies in generating a sufficient number of creative options from within the organization, experimenting to learn, and making the right selections to channel creativity. The composition of the auto industry in ten years will be decided by the quality of top management today.

Christoph Loch is Professor of Technology and Operations Management at INSEAD.
Fabian Sting is a Research Fellow in Technology Management and is the Manager of
the Industrial Excellence Award (IEA) Competition at INSEAD. 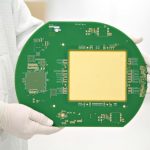